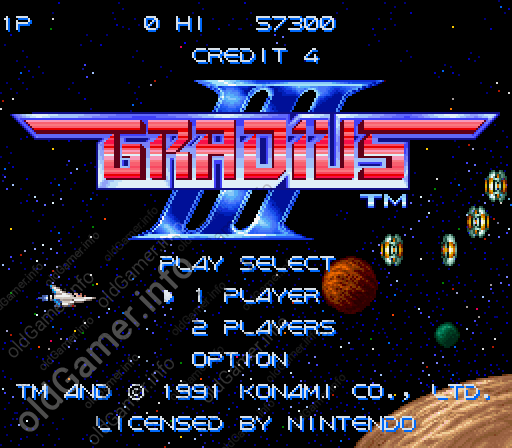 Gradius III is a 1989 scrolling shooter video game developed and published by Konami, originally released for the arcades in Japan and other parts of Asia on December 11, 1989. It is the third game in the Gradius series. The game was ported to the Super Nintendo Entertainment System in Japan in 1990 and North America in 1991, and served as a launch title for the system in North America.

The player returns as the role of the pilot of the Vic Viper starfighter to battle the onslaughts of the Bacterion Empire. There are a total of ten levels in the game, with stage 4 being something of a bonus level; here, the player controls the Vic Viper in a third-person perspective and must avoid colliding with walls. Though the level is completely devoid of any enemies, free floating power-ups are scattered throughout. There are also two hidden levels that are based on the early sections of Gradius and Salamander. The game contains the familiar weapons, level layouts, and enemies that have become trademarks of the series.