Marvel Super Heroes In War of the Gems is a 2D action platformer video game developed by Capcom for the Super Nintendo Entertainment System, based on the events of Marvel Comics' series The Infinity Gauntlet and The Infinity War. In the game's plot, Adam Warlock calls upon Earth's greatest superheroes to seek out the Infinity Gems before they fall into the wrong hands.

The player plays each level as one of five superheroes - Captain America, Iron Man, Spider-Man, Wolverine, or Hulk - as they battle through various locations around the globe and even outer space. Each character's health bar is separate and carries over between missions - healing can only be done by picking up items in the levels or using healing items picked up during missions. When a character falls, they must be revived individually with the appropriate item. After investigating an area, the player may or may not be rewarded with one of the gems resulting in a restart of the entire game. Only two can be picked up during the first four missions, one is picked up in the following mission upon defeating The Magus, and then two more are randomly received in two of the four following levels. Each character can also select any of the obtained Infinity Gems before stages to obtain gameplay advantages: the Power Gem enables greater attack power; the Time Gem allows for faster movement; the Soul Gem doubles a character's health gauge; the Reality Gem makes extra items visible throughout the stage; and the Space Gem allows for higher jumps, useful on open stages. The last gem, Mind, is only received upon defeating Thanos, thus completing the game. 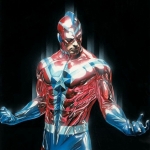