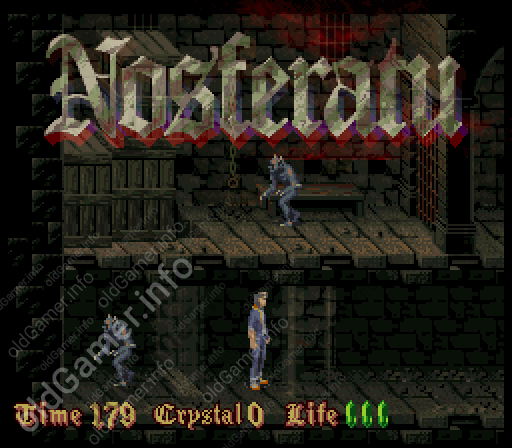 Nosferatu is an action platform game developed and published by SETA Corporation for the Super Nintendo Entertainment System. It was released in Japan on October 7, 1994, and in North America in October 1995. The player controls a young man known as Kyle, who rides to the vampire Nosferatu's castle in order to defeat him and save his beloved girlfriend Erin from his clutches.

The game is played like Prince of Persia, however the player fights with his bare fists. Despite that, they can use many unique moves and special combos with attacking. He fights various monsters such as Frankenstein monsters, zombies, gargoyles and ghosts. The bosses are the Werewolf, and Beast Men, amongst others. There are three types of crystals used in the game in addition to hourglass. Finding an hourglass extends the in-game time. Each crystal has its own unique abilities: red crystals give players a power up at every three crystals, green crystals recover the health of the player while the blue crystal extends the player's health bar.